The transparent HelloMask facilitates non-verbal communication between patients and nursing staff. (Image: EPFL)
Back to news
By Surgical Tribune
June 24, 2020

DÜBENDORF, Switzerland: Researchers of the Swiss Federal Laboratories for Materials Science and Technology (Empa) and the Swiss Federal Institute of Technology in Lausanne (EPFL) have jointly developed a fully transparent surgical mask that is intended to replace the three-layer mask normally worn by medical staff. The mask was developed primarily with the aim of improving non-verbal communication between nursing staff and patients but could also be worn by dentists to protect against transmission of bacteria and viruses, such as SARS-CoV-2. The product is expected to be launched in early 2021.

In the past two months, people in many places have experienced how strange it is to talk to a person whose face is partially hidden by a mask worn to protect others and the wearer from SARS-CoV-2. While this makes it more difficult to decipher facial expressions and impairs acoustics for most, especially for children, the elderly and the hearing-impaired, the masks pose a major obstacle to communication. Owing to these difficulties in the context of surgical masks worn by healthcare providers, a team of researchers from Empa and EPFL’s EssentialTech Centre has been working for the past two years on a completely transparent surgical mask. The researchers have now finalised the material, which is made of organic polymers, and recently founded the start-up company HMCARE. After completing a CHF 1 million fundraising round, the company is ready to move into the production phase. 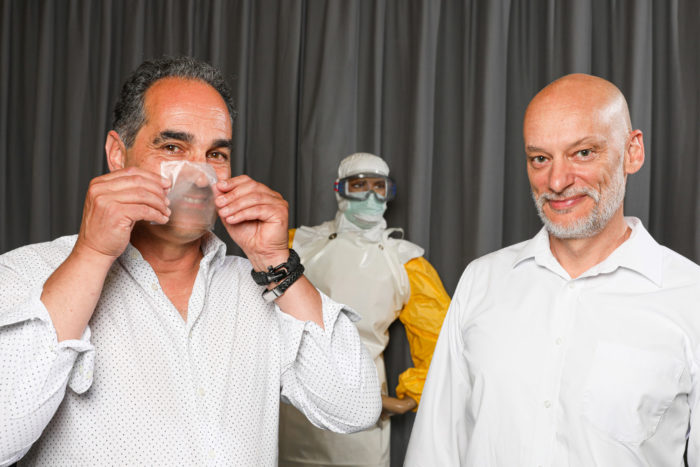 Dr Klaus Schönenberger, director of the EssentialTech Centre, which is involved in the provision of modern technology and humanitarian measures to developing countries, was working in western Africa during the 2015 Ebola outbreak. “It was touching to see that nurses—covered from head to toe in protective gear—pinned photos of themselves on their chests so that patients could see their faces,” he said.

The following year, Schönenberger was approached by Dr Thierry Pelet, now the CEO of HMCARE, and Dr Sacha Sidjanski, a project manager at EPFL’s School of Life Sciences, with an initial design for a transparent mask. Motivated by his experience in Africa, Schönenberger did not hesitate. Pelet and Sidjanski were inspired by Diane Baatard, who was formerly engaged in storytelling to seriously ill children at Geneva University Hospitals. She thought it was a pity that the children could not see her facial expressions while she was telling stories.

“You can find prototypes of masks that are partly transparent, but they’re just normal masks with some of the fabric replaced by clear plastic,” said Pelet. However, since this plastic is not porous, it impedes breathing comfort and makes the mask moist. Over two years, the Empa and EPFL researchers were able to combine transparency, durability and porosity optimally. The result was a membrane made of a polymer specially developed for this application. “We can produce fine electrospun membranes with a pore size of about 100 nm,” explained Dr Giuseppino Fortunato from the Laboratory for Biomimetic Membranes and Textiles at Empa, who developed the material together with Empa postdoctoral fellow Dr Davide Barana. The structure of the fibres creates extremely small gaps that allow air to pass through but not viral and bacterial particles.

In order to guarantee optimal protection, the new masks—just like surgical masks currently in use—are intended for single use. The question of recycling or the use of a biodegradable material was raised at the very beginning of the project. “Our masks are made of 99% biomass derivatives, and we will keep working on them until they are completely eco-friendly,” commented Pelet. 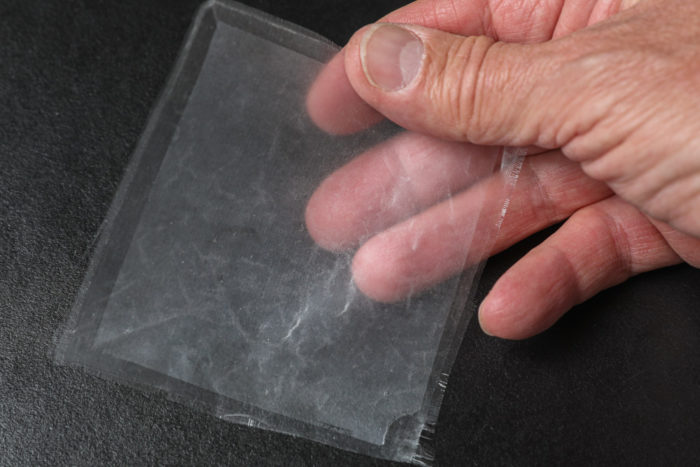 The polymer fibres of which the HelloMask is made produce an apparently transparent membrane but with pores too small for pathogens. (Image: EPFL)

The material is made using electrospinning, for which electric force is used to produce a mat of polymer fibres, and the researchers have adapted the method slightly for large-scale production. The material will be generated in spools, from which individual masks can be cut and assembled. While the research team initially planned to fabricate the masks in Asia, it is now considering keeping production in Switzerland. In light of the increased demand for conventional surgical masks owing to the SARS-CoV-2 pandemic, production lines should soon be in place and the developers foresee no problems in this regard. Pelet is currently negotiating with several companies and authorities.

The great demand for protective masks owing to the pandemic has made it easier for HMCARE to find investors. The HelloMask project was initially supported by a dozen non-profit organisations and later by the Swiss Innovation Agency. While the masks will first be sold to the medical community—including dentists—they may eventually be marketed to the general public.

COVID-19 free hospital areas could save lives after surgery

BIRMINGHAM, UK: For fear that patients may contract COVID-19 in hospitals, millions of operations around the world were cancelled during the first wave of the pandemic. If operations for cancer and other time-dependent diseases are delayed, they may progress to be untreatable. Setting up COVID-19 free hospital areas for surgical patients could save lives during the second wave of the pandemic, a new global study has revealed.

HALLE (SAALE), Germany: The use of medical implants can be hampered by chronic inflammatory reactions, which may result in failure of the device. Now, researchers at Martin Luther University Halle-Wittenberg (MLU) have developed a new method of applying anti-inflammatory substances to implants in order to inhibit undesirable inflammatory reactions in the body.

Interview: IPS Implants Preprosthetic is “a useful addition for a specific patient group”

In order to provide an alternative implant solution for those patients with poor medical preconditions, Prof. Nils-Claudius Gellrich, director of the clinic for oral and maxillofacial surgery at the Hannover Medical School in Germany, and Dr Björn Rahlf, senior physician for oral surgery at the same clinic, designed the IPS (individual patient solution) Implants Preprosthetic. In conversation with Dental Tribune International, Gellrich and Rahlf spoke about the patients for whom it is suitable and how they developed this individual implant.

GOTHENBURG, Sweden: A research team from Sahlgrenska University Hospital at the University of Gothenburg has, for the first time, transplanted a uterus from a deceased donor. The operation proceeded without complications and the recipient is doing well. The researchers plan to carry out another five transplants of a deceased donor’s uterus in the course of 2020 and 2021.

details
Ad may be closed in 5 seconds